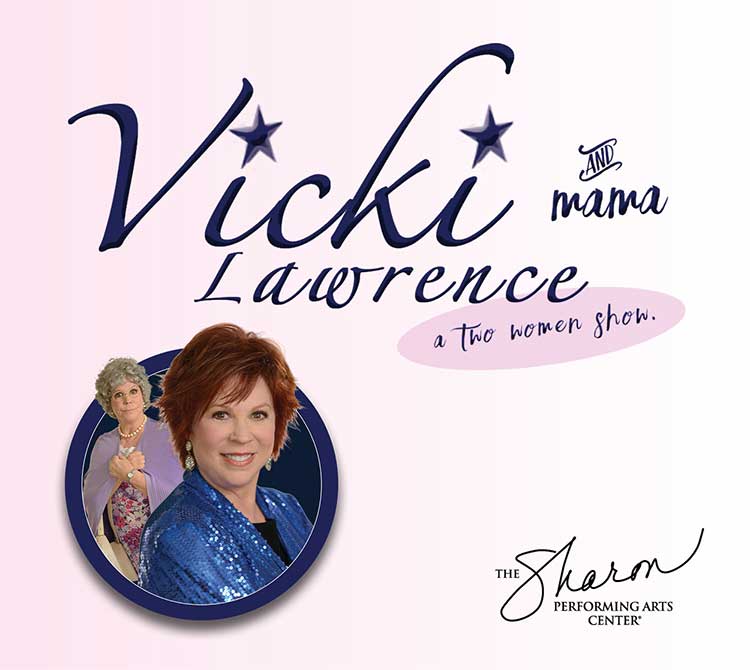 In support of Cornerstone Hospice
cornerstonehospice.org

About Get Off The Bus Concerts
Get Off The Bus Concerts came about through the vision of Joe and Fatima Bamford, former owners of HALJOE COACHES. After a long and varied career in the music and entertainment industry Joe thought, "Wouldn't it be fun to do some concerts with some people who have traveled on our buses over the years?" Inspired by their daughter, Jenn, who fundraises relentlessly for several organizations in her hometown of Moncton, New Brunswick, Joe and Fatima realized the importance of giving back so decided to turn their concert idea to draw attention and support for worthwhile causes. Some of the concerts have included Willie Nelson, Kenny Rogers, Merle Haggard, Olivia Newton John, Styx, Trace Adkins and Neil Sedaka. For more information visit GetOffTheBusConcerts.com

Emmy Award winning comedienne Vicki Lawrence is one of the most beloved television personalities of her generation. Plucked out of total obscurity as a high school senior, Vicki went on to become part of the now-legendary cast of the "Carol Burnett Show." "I went to the Harvard School of Comedy in front of America," says Lawrence of her Burnett Show training.

In the seventh season, and hundreds of hilarious sketches later, at the ripe, old age of 24, Vicki created her most endearing character to date, Thelma Harper, or "Mama" as she is better known to her fans. After the Burnett Show, Vicki went on to star in "Mama's Family," which consistently topped the ratings for its entire six-year run of original shows. "Mama" has attained almost a cult status among her legions of loyal television viewers, who still enjoy her in reruns twice daily throughout most of the country and the world.

No stranger to television, Vicki perfected her hosting skills on her own daytime talk show, "Vicki!," from 1992 to 1994. She received critical acclaim when she was the only talk show host since Oprah to be nominated for a Daytime Emmy in her freshman year. Through the years Lawrence has made appearances on other television programs, such as Laverne & Shirley, Major Dad, Roseanne, Hannah Montana (Hannah's Grandma Stewart), and Yes, Dear. Lawrence has also appeared with Burnett, Korman, and Tim Conway in the Burnett show retrospectives. Lawrence most recently co-starred in the popular FOX-TV 2018 comedy series The Cool Kids.

The unprecedented ratings for the "Carol Burnett Showstopper Special," which delighted more than 50 million viewers, convinced Ms. Lawrence that the time is right to take Mama out of the closet, dust off her sensible shoes and hit the road with her new touring production, Vicki Lawrence and Mama: A Two-Woman Show.

Vicki will take the stage first. "My show is not a retrospective," she explains. "The show is a mixture of stand-up comedy, music and my observations about real life." The multi-talented entertainer is mostly known for her acting and comedic talents, but she also earned a gold record for the 1973 hit, "The Night the Lights Went Out in Georgia."

"I think people will get a kick out of the things Mama has an opinion about. We're creating new material with a more modern and cutting edge. Where Mama is concerned, expect the unexpected. There's really nothing she can't do," she says. "I hope people will be pleasantly surprised by a side of Vicki they may never have seen…I know they will be looking forward to Mama, and for her part, that crazy old gal will be up to the challenge."

This is not Vicki's first foray into theater. She has appeared in numerous productions, including Carousel, Send Me No Flowers, No, No, Nanette, My Fat Friend, Chapter Two, Twigs, Hello Dolly, Special Occasions, I'm Getting My Act Together and Taking It ON The Road, Annie Get Your Gun and live from the Grand Ole Opry, Nunsense 3: The Jamboree which aired on TNN.