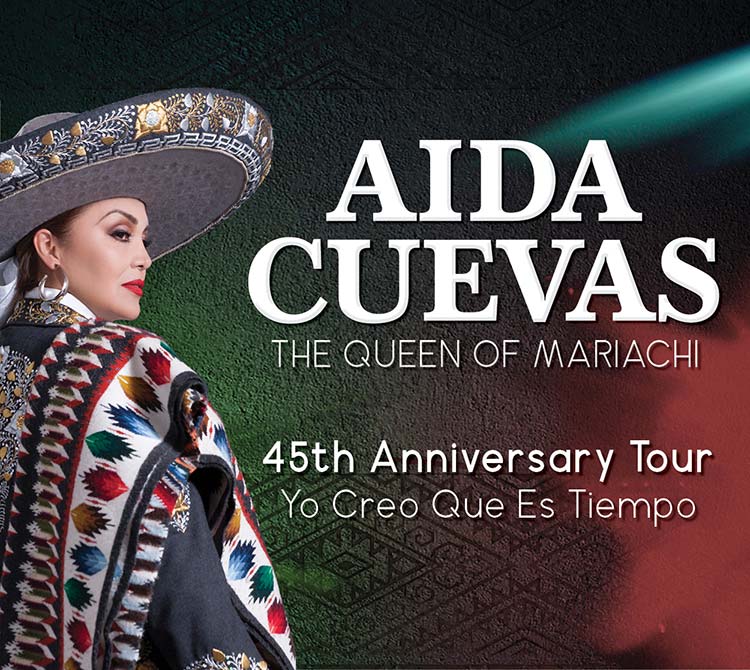 Aida Cuevas presents "45th Anniversary / Yo Creo Que Es Tiempo" an unforgettable and emotional concert celebrating a long-lasting career as Mexico's most important female voice. She is joined by renowned Mariachi Aztlán along with other special guests. With a 46-year career and 41 album releases to her credit, Cuevas, dubbed as "The Queen of Mariachi", is an esteemed figure in Mexico, beloved for her unswerving devotion to traditional mariachi music and for her mastery of its demanding vocal forms.

Aida Cuevas celebrates one of the most important careers in traditional Mexican music with GRAMMY® and Latin GRAMMY® awards, and eleven nominations, becoming the first female singer in the mariachi genre to ever win these awards. A master of the mariachi art song, Aida will perform her most beloved songs, including El Pastor, Mexico en la piel, as well as her greatest hits Te Doy Las Gracias and Quizás Mañana.

Celebrate Mexico's legendary and powerful voice with a new show and a new tour celebrating 45th Anniversary bringing the very best of Mexico's music with her unique voice and style, allowing her to cultivate a 46-year successful career, leaving a remarkable imprint in the history of Mexican music.

"Cuevas is to Mexico what Aretha Franklin is to the United States: a powerful voice that encapsulates the essence of her nation's spirit.” —The Kansas City Star

"Aida Cuevas is Mexico's most important female voice celebrating a long-lasting career, leaving a remarkable imprint in the history of Mexican music.” —Broadway