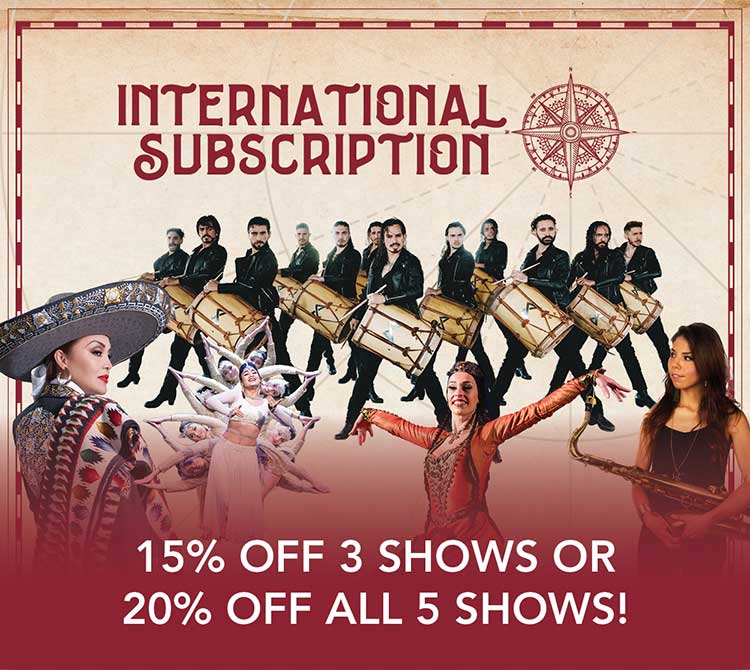 10/14/2022
Melissa Aldana: More Info (Chile)
GRAMMY-nominated saxophonist and composer Melissa Aldana has garnered international recognition for her visionary work as a band leader, as well as her deeply meditative interpretation of language and vocabulary. She was recently signed with Blue Note Records and releases her debut album with the historic label titled 12 Stars in March 2022. "Melissa Aldana is one of the foremost musician/composers of her generation," says Blue Note President Don Was.


10/25/2022
Aida Cuevas: More Info (Mexico)
Under the direction of Dr. Dahlia Guerra and Mr. Francisco Loera, Mariachi Aztlaán has been captivating audiences throughout Mexico, Canada and the United States since its establishment in 1989. They travel as musical ambassadors representing the beauty of Hispanic music and its cultural traditions. Recognitions for performance excellence initiated an invitation from the White House to perform at the signing ceremony of an Executive Order renewing and enhancing the White House Initiative on Educational Excellence for Hispanics, performing for President Barack Obama in 2010.


3/11/2023
Malevo: More Info (Argentina)
MALEVO — the "South American Sensation" — created by director, choreographer, and dancer Matías Jaime. This thrilling all-male group specializes in Malambo — a traditional Argentine folk dance of great virility and dexterity — and takes it beyond its limits with a modern, avant-garde, and transgressive approach, while still staying true to the cultural foundations of this traditional gaucho artform.


3/24/2023
The Royal National Ballet: Fire of Georgia: More Info (Georgia)
When we think of Georgian dance, we think of a celebration of life and the country's rich and diverse culture. Each dance portrays the characteristics of the region in which it originated. The mountain dances are different from valley or lowland dances. The costumes are different for every dance and resemble the clothing of the past in different regions of Georgia.


4/4/2023
Taj Express: More Info (India)
Taj Express — Bollywood Jukebox explodes with the sounds of India and Bollywood, featuring vibrant & expressive hits of Bollywood with a unique mix of traditional, classic, modern, disco and retro music which have been entertaining billions for generations. The story revolves around Shankar, a young composer and his foray into the Bollywood film industry. His music bridges Bollywood's chartbuster classic's with new age compositions. The show comprises hit numbers for all age groups, backed by a unique & exotic company of performers and musicians.