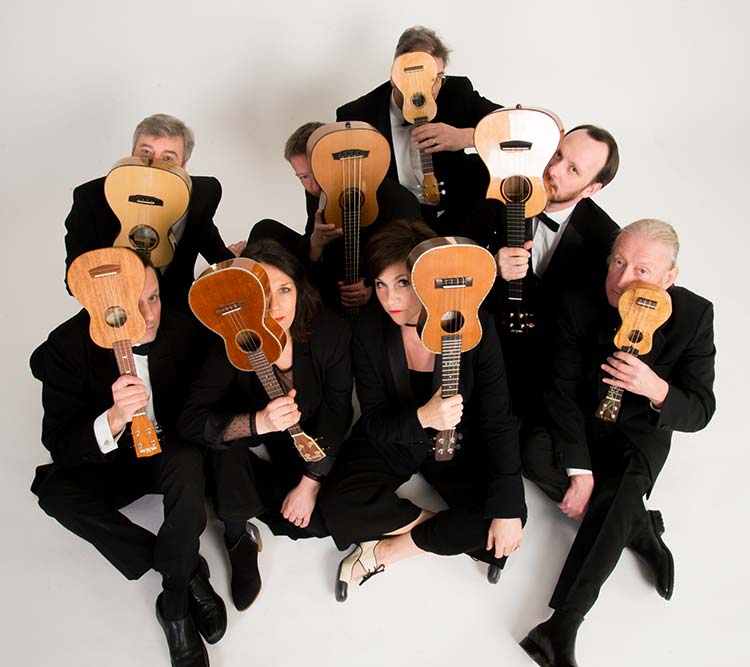 The Ukulele Orchestra of Great Britain

The programme will be announced from the stage. There will be a 20 minute intermission The Ukulele Orchestra is a touring musical group which has been delighting audiences, raising the roof, selling out performances, and receiving standing ovations since 1985. This all-singing, all strumming group has been performing for 35 years using only a fistful of ukuleles and maintaining that all genres of music are available for reinterpretation.

The premise sounds astoundingly simple: instruments, voices, no gimmicks, no light show. Yet the New York Times exclaim that "they extract more than seems humanly possible from so small and so modest an instrument" and millions have enthused over the years about the fact that the Orchestra tears the house down with a lively, touching, catchy, emotive, stomping show, threaded with humour and wit which inexplicably draws the audience in, to a joyous world beyond the conflicts of musical genres and transcending differences between a serious concert and entertainment.

As soon as the performers walk on stage, the audience feels that they are in safe hands, at home with friends who are totally in command of the art, craft, and magic of the stage. Sitting in chamber group format, and dressed in formal evening wear (regardless of the time of day or the venue, whether Glastonbury Festival or Carnegie Hall), it uses the limitations of the instrument to create a musical freedom as it reveals unsuspected musical insights.

At this point, the audience may well sit back, all prior assumptions forgotten, and allow the Orchestra, which has sixteen-handedly changed the face of the ukulele world, to give what the Independent raved as "the best musical entertainment in the country".

The first gig, intended as a one-off bit of fun was an instant sell out and led to national radio, TV, album recordings and international tours. Since then the Orchestra has become what the Observer called "a much loved institution" giving thousands of concerts, TV, and radio appearances all over the world. There have been tours in Britain, across Europe, Scandinavia, New Zealand, Australia, Japan, China America, Canada and the North Pole. They also had the honour to perform, by invitation of The Prince of Wales, at the private 90th Birthday party of Her Majesty the Queen at Windsor Castle.

The Ukulele Orchestra have released CDs and DVDs on their own independent label. The orchestra\'s music has been used in films, plays, and commercials. The Financial Times praised "The sophisticated sound they make - both percussive and melodic - is at once hilarious and heartfelt".

The Orchestra was formed in 1985 as a bit of fun, but the first gig was an instant sell-out, and they\'ve been performing ever since. By 1988 they had released an LP, appeared on BBC TV, played at WOMAD and recorded a BBC Radio 1 session.


The current ensemble has been playing together for over 20 years, and has become something of a national institution.


The Orchestra has given thousands of sold-out concerts across the world, including Great Britain, Germany, Sweden, Finland, Poland, France, America, Canada, New Zealand and Japan.


Over the last 29 years, the Ukulele Orchestra of Great Britain has spawned hundreds of imitators, and you can now find Ukulele Groups in nearly every major city, indeed, the Orchestra are often blamed for the current Ukulele revival which is sweeping the globe.


The Ukulele Orchestra\'s music has been used in films, plays, and commercials, while film clips of the Orchestra\'s live concerts and TV appearances on websites such as YouTube have been watched millions of times. Collaborators have included Madness, David Arnold, The British Film Institute, The Ministry of Sound, Yusuf Islam (aka Cat Stevens) and The Kaiser Chiefs. 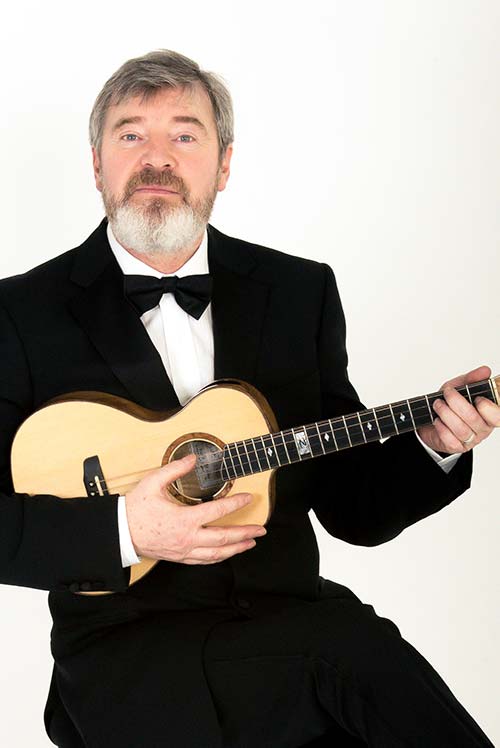 Born in Liverpool, Richie took up the guitar at thirteen. He played with many local bands
through his teens, including sharing the bill with Ralph McTell at Liverpool University and
with Thin Lizzy at The Cavern. During this time he also roadied for Frank Zappa and
Status Quo.


After studying music at college in Liverpool, he moved to London in the 80s where he
played with Snake Davis on Motown tours backing Mary Wells, Martha Reeves, Ben
E.King and Edwin Starr - this led him to meeting George, at that time playing the
Hammond organ.


In 1985, George invited him to play baritone ukulele in his new project with Kitty Lux - a
Ukulele Orchestra. Within 2 years, Richie had moved to Yorkshire, and for ten years, he
juggled playing with two local bands with the Ukes gigs.


Richie moved to Dorset in 2001. He has since travelled the world with the Ukes playing
venues most musicians can only dream of! 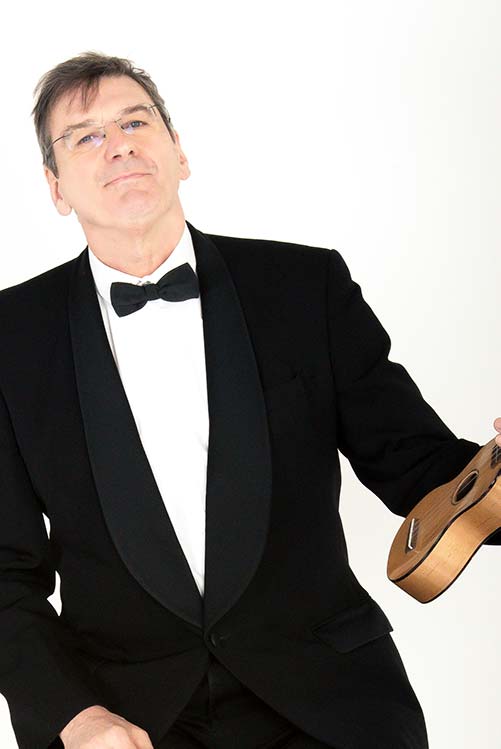 At over 2 metres tall, Peter Brooke Turner may well the tallest ukulele player in the world -
he is certainly the tallest in the Ukulele Orchestra. He was born in Portugal and grew up in
the Soviet Union, Brazil, America, Finland and Italy. After false starts on the violin, trumpet
and guitar, he finally discovered the ukulele and joined the Ukes in 1995.
He has released three albums under his pseudonym Tony Penultimate and has worked
with many well known showbiz names in the UK and has even lent his uke to Tiny Tim. He
fronted his own \'Ukulele Kings\' rock group in the 90s.


Peter has started the worlds first high altitude drama company - the ATTC (Airline Toilets
Theatre Company) which has subsequently produced over twenty high quality, low budget
songs, sketches and shows (all on Peter\'s iPhone) from this oft neglected performance
area. They can be viewed online. 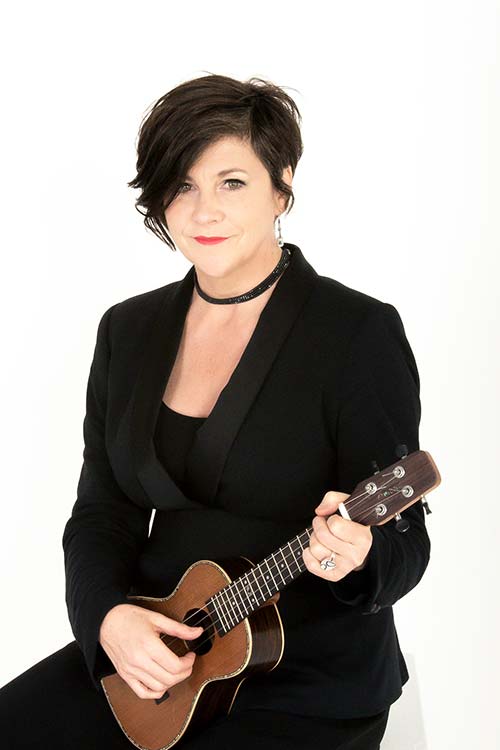 Leisa’s has worked as an actor, director, comedy writer and teacher. Her professional
directorial debut in 1991 of Oscar Wilde\'s The Selfish Giant, won the Lloyds Theatre
Challenge and was performed at the National Theatre in London.


Since then, she has taught Stand Up Comedy at the Soho Theatre, directed several
smash-hit comedy shows, written and performed two critically acclaimed solo shows, and
for some time, was one half of the duo, Adams & Rea, who scooped the Musical Comedy
Awards prize in 2009.


Alongside this, Leisa co-created a theatre show with Miranda Hart and was one of the
writers for the pilot episodes of BAFTA nominated \'Miranda\' on the BBC.
When she’s not on tour with the Orchestra, Leisa is a creative consultant for several
organisations offering training, workshops and advice.


She joined the Ukulele Orchestra in 2003 and found it to be the perfect home for her
colourful backstory. 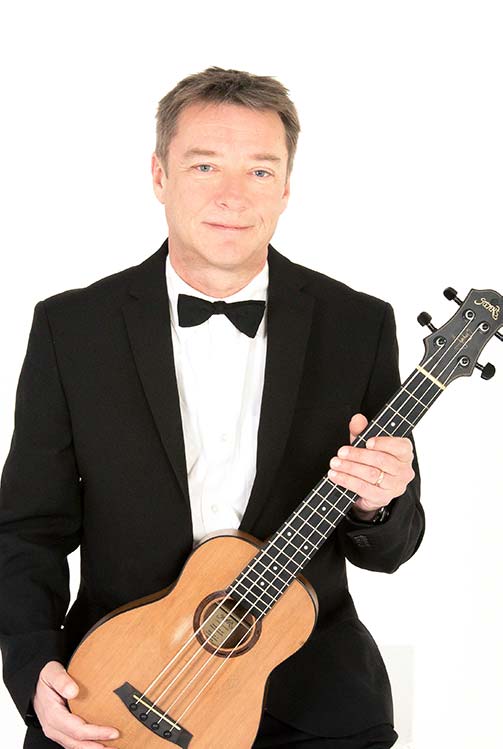 Jonty was serenaded to sleep as a child by his father playing Bach on the cello, inevitably
he learned to appreciate music and knew from an early age that he wanted to be a
performer. His formative years were spent playing music and acting. He discovered and
fell in love with the bass in 1972.

until the bassist left and he took over; he changed from struggling actor to struggling
musician. He supplemented his income as a London double decker bus driver and has
since discovered he drove Will to school.


Jonty became a full time musician in the early 90\'s joining the orchestra in 1992 while also
recording and touring with Ray Davis, Louisiana Red, Marcus Malone and John Mayall. He
can also be heard whistling on many TV soundtracks and commercials.


He currently lives in Germany and often performs as a guest bassist with various bands
and supported Eric Clapton on the German leg of his 2018 stadium tour. 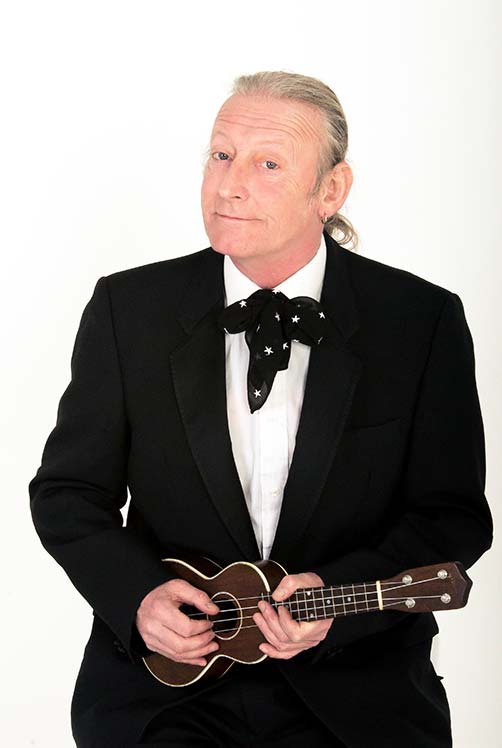 Dave has worked as a teacher, a drama & a special needs specialist, and is a Makaton
signer. For many years he was a compere at Glastonbury Festival for the Theatre Stage.
Dave has been with the Orchestra for 35 years and notes that he has "jammed with a
Beatle and performed for a Rolling Stone" as well as discussed gardening with HRH
Prince Charles. At the same Chamber Music Chicago Festival at which the Kronos String
Quartet played Purple Haze in the 80s, Dave introduced the Ukulele Orchestra version of
Born To Be Wild to the north American audience.


When Dave is not touring with the Orchestra he may be found instead with his bluesy
group: The World Wide Whelks, or on his allotment. 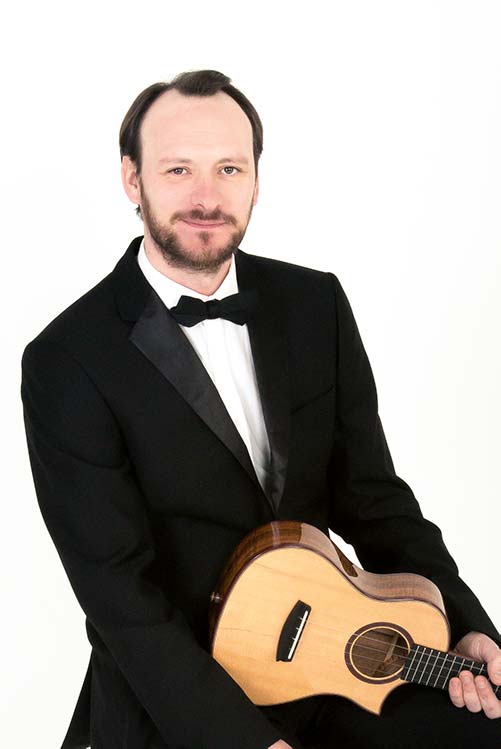 Ben was born in Cornwall but grew up in Hampshire. At the age of 8 he began playing the
drums, turning to the guitar at age 11. At 23, Ben formed the rock band Purple Monkey,
which became a popular band along the South coast of England. At 25, he decided to
learn the violin and mandolin and formed the folk duo, Teapot Junkies, releasing two
albums of original material. He went on to teach himself the saxophone, flute, trumpet and
banjo.


At 30, Ben decided that a proper job might be necessary and earned himself an HND in
electronics but in 2007 was drawn back to music when he saw the Ukulele Orchestra
perform on \'Jools Holland Hootenanny\'. The next day he bought a ukulele and began
performing and teaching workshops at festivals around the UK until, in 2014, he was
invited to play with the Orchestra, he has since toured America, China, Europe,
Scandinavia and the UK with them. 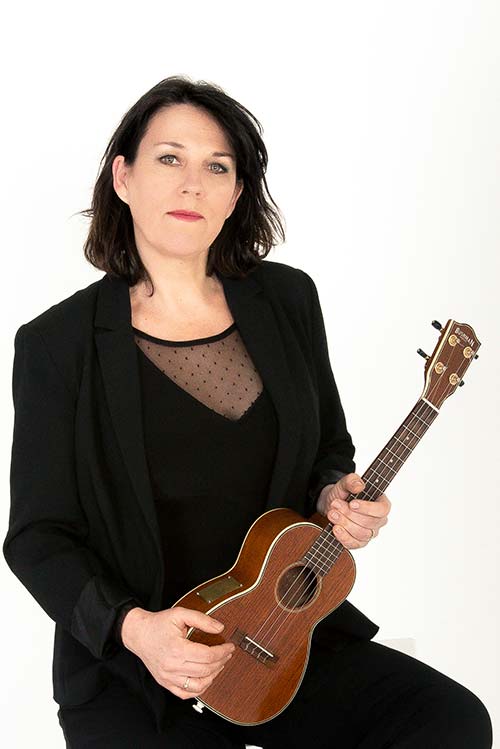 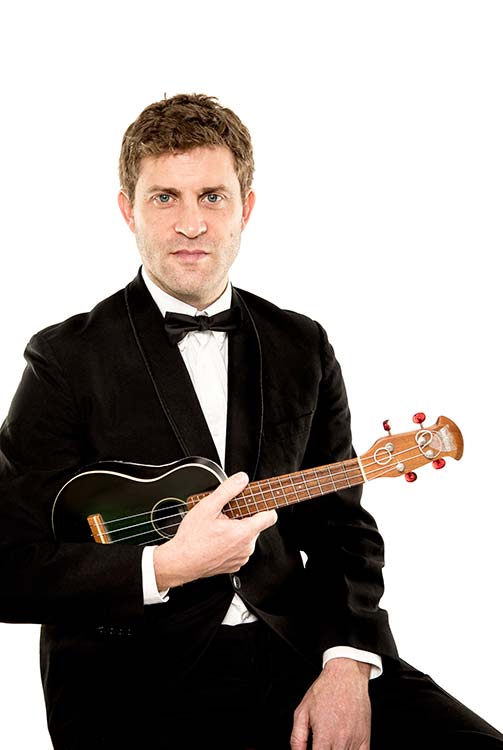