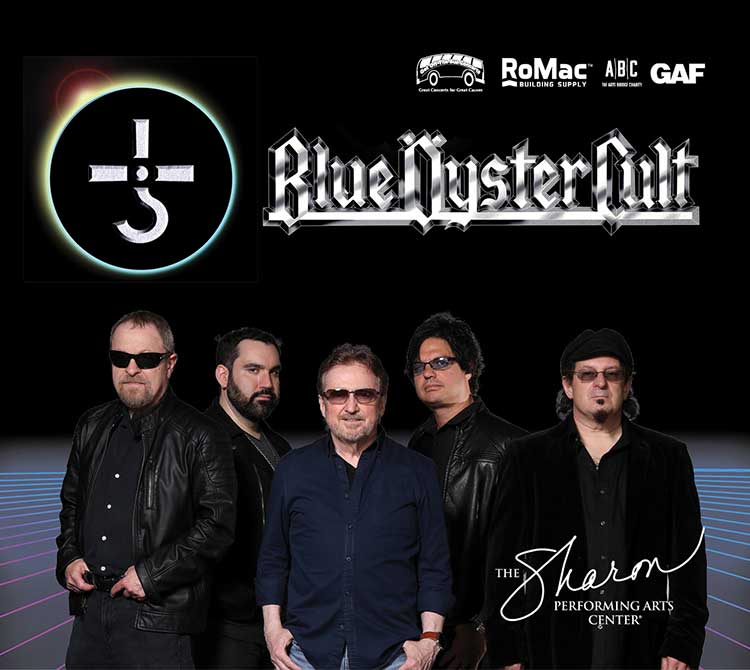 Howey-In-The-Hills, FL - Get Off The Bus Concerts is pleased to present Blue Öyster Cult on Tuesday, January 10th at 7pm at The Sharon L. Morse Performing Arts Center in The Villages. Tickets on sale October 26, 2022 and can be purchased for the show at GetOffTheBusConcerts.com, TheSharon.com or (352) 753-3229. This show is in support of the Arts Bridge Charity. (theartsbridgecharity.org) and sponsored by Romac Building Supplies and GAF Roofing.

About Arts Bridge Charity
Our mission is to bridge the financial gap when artists or artistic endeavors lose income or assets due to unforeseen circumstances out of their control. The arts play an important role in all communities, allowing people to engage with one another and let their imaginations run wild. The arts also promote understanding of one another and sharing of culture. In order to support the arts, the artists must be supported, and The ABC endeavors to provide that assistance.

About Get Off The Bus Concerts
Get Off The Bus Concerts came about through the vision of Joe and Fatima Bamford, former owners of HALJOE COACHES. After a long and varied career in the music and entertainment industry Joe thought, “Wouldn’t it be fun to do some concerts with some people who have traveled on our buses over the years?” Inspired by their daughter, Jenn, who fundraises relentlessly for several organizations in her hometown of Moncton, New Brunswick, Joe and Fatima realized the importance of giving back so decided to turn their concert idea to draw attention and support for worthwhile causes. Some of the concerts have included Willie Nelson, Kenny Rogers, Merle Haggard, Olivia Newton John, Styx, Trace Adkins and Neil Sedaka.

For five decades, Blue Öyster Cult has been thrilling fans of intelligent hard rock worldwide with powerful albums loaded with classic songs. Indeed, the Long Island, NY-­based band is revered within the hard rock and heavy metal scene for its pioneering work. Blue Öyster Cult occupies a unique place in rock history because it's one of very few hard rock/heavy metal bands to earn both genuine mainstream critical acclaim as well as commercial success.

The band is often cited as a major influence by other acts such as Metallica, and BÖC was listed in VH1's countdown of the greatest hard rock bands of all time.

Upon the release of BÖC's self-­titled debut album in 1972, the band was praised for its catchy-­yet-­heavy music and lyrics that could be provocative, terrifying, funny or ambiguous, often all in the same song. BÖC's canon includes three stone-­cold classic songs that will waft through the cosmos long after the sun has burned out: The truly haunting "(Don't Fear) The Reaper" from 1976's Agents of Fortune, the pummeling "Godzilla" from 1977's Spectres and the hypnotically melodic "Burnin' for You" from1981's Fire of Unknown Origin. Other notable BÖC songs include "Cities on Flame with Rock and Roll," "Then Came the Last Days of May," "I Love the Night," "In Thee,""Veteran of the Psychic Wars," "Dominance and Submission," "Astronomy," "Black Blade" and "Shooting Shark."

We realized we're a 'classic rock' band. That's what we are, that's what we do best, and that’s what we know. The band members are proud of BÖC's classic sound, and pleased the band is creating vibrant work for disenfranchised music lovers who don't like the homogenized, prefabricated pop or sound-­alike, formulaic rap-­metal, which monopolizes the radio airwaves and best-­seller charts.
BÖC has always maintained a relentless touring schedule and an album of new material THE SYMBOL REMAINS was released October 9th 2020 to rave reviews.